Producer met with the King before planning episode in Saudi Arabia.

Cinerama crews are slated to photograph Dhahran and the adjacent area, including Tapline, for a Cinerama production on the "seven modern wonders of the world" this week.

Radio commentator Lowell Thomas, who heads Lowell Thomas Productions, flew in to Dhahran Dec. 27, saw the King on the 28th, and left for Pakistan via Bahrain on the 29th.

After discussing the project with the King, Thomas contacted his ground crew, which uses a DC-4 in Aden, and this crew flew to Riyadh to shoot various scenes, including a camel race and Nassiriyah Palace.

Thomas said the production's episode in Arabia will show "the Arabia of the Arabian Knights in juxtaposition with the modern Arabia."

Caption from top photo: Lowell Thomas (center, who heads up the Cinerama company "shooting" in Arabia, arrives at Dhahran for a two-day visit At left is president R.L. Keyes, and to the right, Air Base executive officer Col. George Humbrecht.

Also on this date

1976 — The Khmer Rouge proclaim the constitution of Democratic Kampuchea

1919 — The German Works' Party, which would later become the Nazi Party, is founded in Munich This Day in History (1978): Kelberer Assumes Board Chairman, CEO Posts 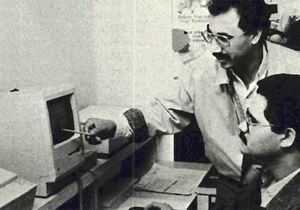 This Day in History (1990): PDP Study Day a two-way communication program that works 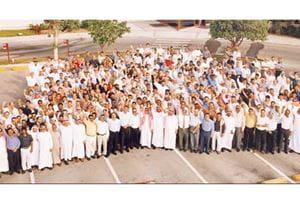