For a third year, some of the world’s best golfers tested their skills next to the Red Sea at the Royal Greens Golf Club at the King Abdullah Economic City in a tournament that teed off last weekend.

The four-day tournament, a stop on the European Tour known as the “desert swing” — and the first event to be held in the Kingdom — is one example of the effort the Kingdom and the company are making to encourage sports, health, and wellness.

U.S. golfer Dustin Johnson, ranked No. 1 in the world, won the Saudi Invitational for the second time, finishing two strokes ahead of Englishman Justin Rose and fellow American Tony Finau.

Johnson took the tournament lead on Saturday following Friday’s weather-shortened round, shooting a four under par 66 for a two-stroke lead going into Sunday’s final round.

Golf in Saudi Arabia can trace its origins to the early oilmen of Aramco, many of whom were avid golfers and fashioned sand courses to play the game. The legacy of the company’s support for the game of golf continues with an announcement of a sponsorship of a fully sanctioned Ladies European Tour set to take place in 2021. 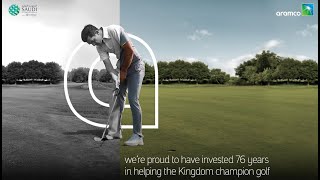